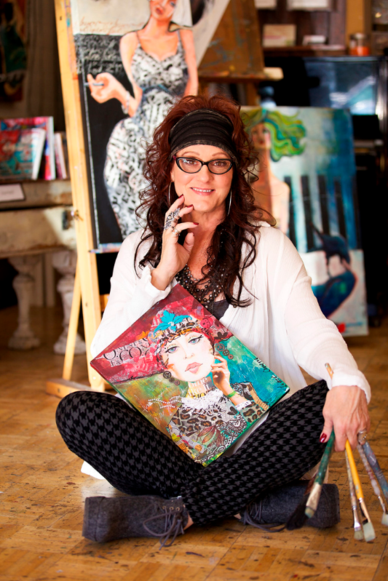 Traci is a self-taught international award winning published artist and definitely a "Mixed Media Madame"!! "I love all things art..acrylic, charcoal, pastels, clay, meTal and texture...they all seem to find a place in my crazy thoughts! What's really fun is trying to figure out how I can bring all elements together in perfect harmony!!!"

Adopted at 6 months old, and raised by two loving and very analytical parents, it was quite clear at a very early age that Traci was cut from a different cloth.   Always the creative, carefree, and wandering soul,  she grew very comfortable being different.  In fact, the thought of having no past, only a future, ignited her alter ego...

"I can be anyone I want to be and no one can prove me otherwise."...

She thrived in art and anything creative.   In high school she excelled as a budding artist, won awards, and was trusted to paint murals for the first time on the school walls.  Clear signs pointed in the direction of design or arts for her future.   It might have been the times, or that no one really knew what to do with her, and perhaps that famous statement,  "You can't make a living drawing on walls.", which she replied, "Disney did"...

This led her to many dead end jobs following high school.

In her 20's she landed a job as a window dresser and LOVED the creative process it allowed her.   For the first time since high school she was really good at her job!  Promotions came often and life was good...until the company went under...

Her father worked as a supervisor for the State Controller's Office where he was very good at his job and loved by all.  He advised Traci to come work for the state..."You are young, it's good money, plus, you'll have health insurance and a retirement "... "Okay daddy"...

She spent the next 17 (longggg) years working for the state as an auditor...

"I know, funny right? not so much.   Which by the way, I sucked at it, but I put on really good retirement parties!"

After staring at blank gray prison colored walls, AND using the wrong side of her brain for waaaaay to long, she decided to separate from the state and chase her "TRUE PASSION", a calling if you may, working as a muralist.   She has had the pleasure of "drawing" on many private home walls, model homes, public walls, and colleges in the past...but now, she feels so privileged to share her art with the rest of the world.

She began painting on canvas, "Big Canvases". She thought, "The sky is the limit, and it's way cheaper than therapy!"   It became a personal journey of how she'd paint the world if she could choose the colors!

Traci took a few college classes where she heard once again all the things she shouldn't do rather than allowing herself to grow in what she "could do".   So, she set out on her own educational journey.

Growing up Traci  was blessed with a family that loved to travel.   The natives in Africa went to extremes to perform ceremonies chanting and dancing in amazing costumes with their bodies carved in grotesque ways.  Then there was Europe, with its amazing structural art and history left for all to admire years and years later.

"I remember while living in Africa I was always attracted to the colors and patterns in the women's hand made garments that flowed to the ground and the head pieces that matched.  The exotic festivals we would attend were creative fuel for my soul and years later found a place in all my art.  While in Europe I thought, "If only the walls could talk, how long I would sit and listen to the thoughts of Michelangelo as he caressed his brushes across the ceiling of the Sistine Chapel."

She started studying every artist from the 16th to the 18th century, consuming every detail that drove them into blissful creation.

"I hope I will always remain an emerging artist, because to me that means I will never be done educating myself on a subject that I am truly passionate about."

She now resides in Laguna Beach the first part of the month,  and  second part in Auburn, California with her wonderful husband Kel (who by the way was the one that told her to quit her state job and go paint).  Her beautiful daughter Cheyenne who inspires her everyday is grown and on her own, but still a huge part of her art... "She is my third eye" and very often my model!   She also has an amazing step daughter, Josie, and two beautiful grandchildren, Lexie and Nathan.

"I am so blessed to have a supportive family and a working studio and gallery right on the main strip of Auburn, and now  two galleries on PCH in Laguna Beach where I can share my visions with all that pass through.

The greatest rush I have begun exploring is Live Performance Art... I love creating a piece of art to live music, in front of an audience!  A total in the moment experience, not knowing where it is going or where it will end!  I love the challenge it brings, all out in the open, no edits, just pure energy from the audience, the music, and my brushes!!

I LOVE BEING AN ARTIST!"

"Oh, and after separating from the state years ago,  December 25th, 2014, I officially turned in my papers and retired at 55.  I received my first monthly retirement check that March...not bitching  so much about that state job now, am I...thanks daddy."
​

Thanks for stopping by and have a very COLORFUL day!